Polonium 210 in cigarettes hits the news

excerpt from: TUESDAY, DECEMBER 12, 2006
http://transform-drugs.blogspot.com/2006/12/at-last-polonium-210-in-cigarettes_12.html?_sm_au_=isVsvfkZfnrrWKtF
At last! Polonium 210 in cigarettes hits the news

I have been researching this story for a number of years – that cigarettes contain radioactive polonium and lead – but never made any progress getting it into the news. A few times I have contacted science correspondents and never received a reply. I guess it just seemed like too much of a wacko-conspiracy theory, a bit like exploding cigars and Fidel Castro.

And then… the Litvinenko murder happens and polonium appears in the news as a major story, for the first (and probably last) time ever. And now the story I have been twittering on about to my generally disbelieving colleagues for years hits the news - at long last.

So what’s it all about?

Basically there has been various research done over the past 30 years or so to show that there is radioactive polonium-210 and lead-210 present in cigarettes. This fact whilst little known is well acknowledged in the scientific community and beyond dispute.

There is a lot of debate about the possible health impacts of this radioactive content but it is clear that it does enter the lungs in smoke and there is a reasonable case made by a number of authors that this is the direct cause of some, possibly even most, smoking related lung cancer. It is important to note that there is considerable controversy about the extent of the carcinogenic effect of the radioactive content of the cigarettes as this exchange of letters in New England Journal of Medicine from 1982 clearly demonstrates.

Various estimates put the level of radiation absorbed by a pack-and-a-half a day smoker at the equivalent of 300 (Maryland Department of Health & Mental Hygiene) to 800 (The Office of Radiation, Chemical & Biological Safety at Michigan State University) chest X-rays every year – other reports suggest it is much higher, some up to 22,000.

High profile figures have got involved in this debate over the years: The US Surgeon General C Everett Koop stated publicly in 1990 that tobacco radiation is probably responsible for 90% of tobacco-related cancer.

Researchers have induced cancer in animal test subjects that inhaled polonium 210, (Yuille, CL; Berke, HL; Hull, T. 'Lung cancer following Pb210 inhalation in rats.' Radiation Res, 1967. 31:760-774) but were unable to cause cancer through the inhalation of any of the non-radioactive chemical carcinogens found in tobacco.

Some researchers suggest that the radioactive particles are relatively low risk if the exposure is averaged out over the entire exposed surface – but that with inhaled smoke the particles are concentrated in localized regions, the bronchial epithelium (points where the lung airways divide) exposing small numbers of cells to comparatively high levels of radiation – magnifying the carcinogenic effect.

It is clear that the radioactive polonium and lead is present in cigarettes, is being consumed, and a risk – potentially a very serious one - does exist. Marmorstein, J. ('Lung cancer: is the increasing incidence due to radioactive polonium in cigarettes?' South Medical Journal, February 1986. 79(2):145-50), notes that in 1930 the lung cancer death rate for white US males was 3.8 per 100,000 people. By 1956 the rate had increased almost tenfold, to 31 per 100,000.13 Between 1938 and 1960, the level of polonium 210 in American tobacco tripled, commensurate with the increased use of chemical fertilizers. Whilst this is not an established causal link, given the terrifying extent of the death rates, It is amazing that this issue hasn’t received more attention.

This was apparently known to major tobacco companies as far back as 1974, and by 1980 a means to remove the radioactive content was also known – by using ammonium phosphate as a fertilizer, instead of calcium phosphate. This idea is rejected on the basis of expense. This is clearly revealed in the two publically available leaked ‘smoking gun’ memos (reproduced below from the www.tobaccofreedom.com website) from Philip Morris in 1980.

The key quotes are:

..."For alpha particles from Po-210 to be the cause of lung cancers in unlikely due to the amount of radioactivity of a particular energy necessary of induction. Evidence to date, however, does not allow one to state this is an impossibility." 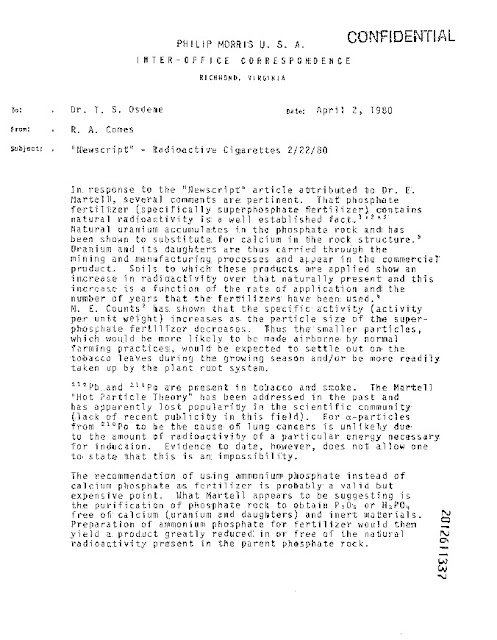 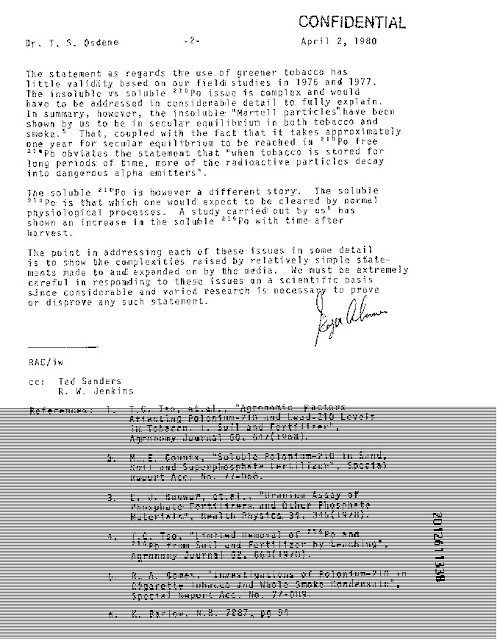 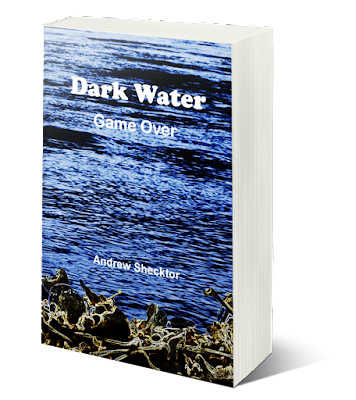